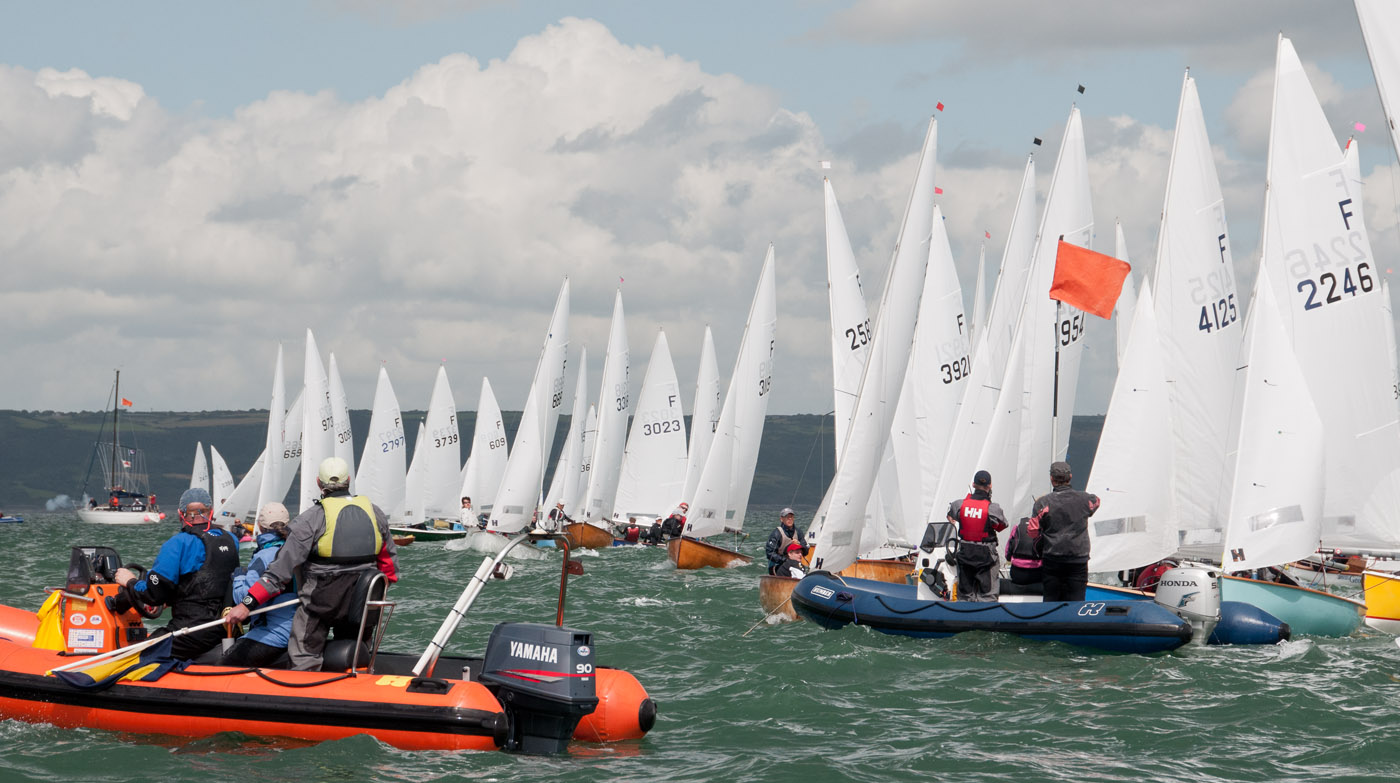 After yesterday’s blast round the bay, the fleet were greeted with quieter conditions, however the pain moved from the legs to the head as the shifty conditions proved tricky for sailors and race committee alike.

Race 3 Felixstowe Ferry Trophy (words Nigel Wakefield)
Dom Johnson and Holly Marston started Race 3 as pathfinder in their new boat 4234 “Vader” – Dom (the Dark Lord) wearing the Darth Vader mask. The force was strongest with veteran Firefly sailor Guy (Yoda) Davison and Sally Wakefield. Fast out of the gate he was. Tacked across fleet he did, and led at the top mark, ahead of Chris (Han Solo) Kameen and Princess Armstrong.  Guy fought off the dark forces of Jamie McEwan and Jo for three laps but was left weakened.  Sith Lord Hudson and Jane Hudson swept them both aside at the last windward mark. Nigel (Skywalker) Wakefield and Emily Sanderson turned on their master on the last run, pushing him to fourth, allowing the McEwans into second and Paul Kameen (R2D2) and Claire Jones (C3PO) into third.

Nationals Race 4 for the RAFSA Trophy eventually got underway after reverting back to a gate start, following 3 tricky attempts at line starts which were hampered by a strong tide and some big old wind shifts. Conditions proved tough for the pathfinder so it paid to get out of the gate early and take advantage of the not insignificant Pembrokeshire wind shifts on the first beat. The majority of the early leaders came from the left as a result, and the fleet quickly became strung out in the marginal surfing conditions on the reaches of the triangle. The underlying swell from yesterday’s epic adventure provided some challenging confused waves to keep the helms frustrated and the crews had to be constantly on their toes with the frequent gusts and lulls in the pressure.

The established front three of Alex Davey/Sally Wilson, Jamie and Jo McEwen and Hamish Walker/Toby Lewis had a great battle over the next sausage lap with all three pairs taking a share of the lead at some point and places constantly changing as a result of the ‘snakes and ladders’ shifts. The classic Welsh weather provided brilliant sunshine, big black clouds, rain and anywhere between 5 and 15 knots, all in the space of a beat! After a shortened final triangle Hamish/Toby eventually came out narrow victors after resorting to some close covering on the last beat in a desperate bid to stay ahead of Alex/Sally who pushed them all the way to the finish!

With lighter winds forecast tomorrow it’s all to play for and everyone on the water is enjoying this stunning summer venue. The famous Tenby SC hospitality continues tonight with a live band and lasagne laid on. The pledge to drink the bar dry continues……..watch this space.

NB: Race 2, postponed from Sunday, will be sailed on Tuesday.