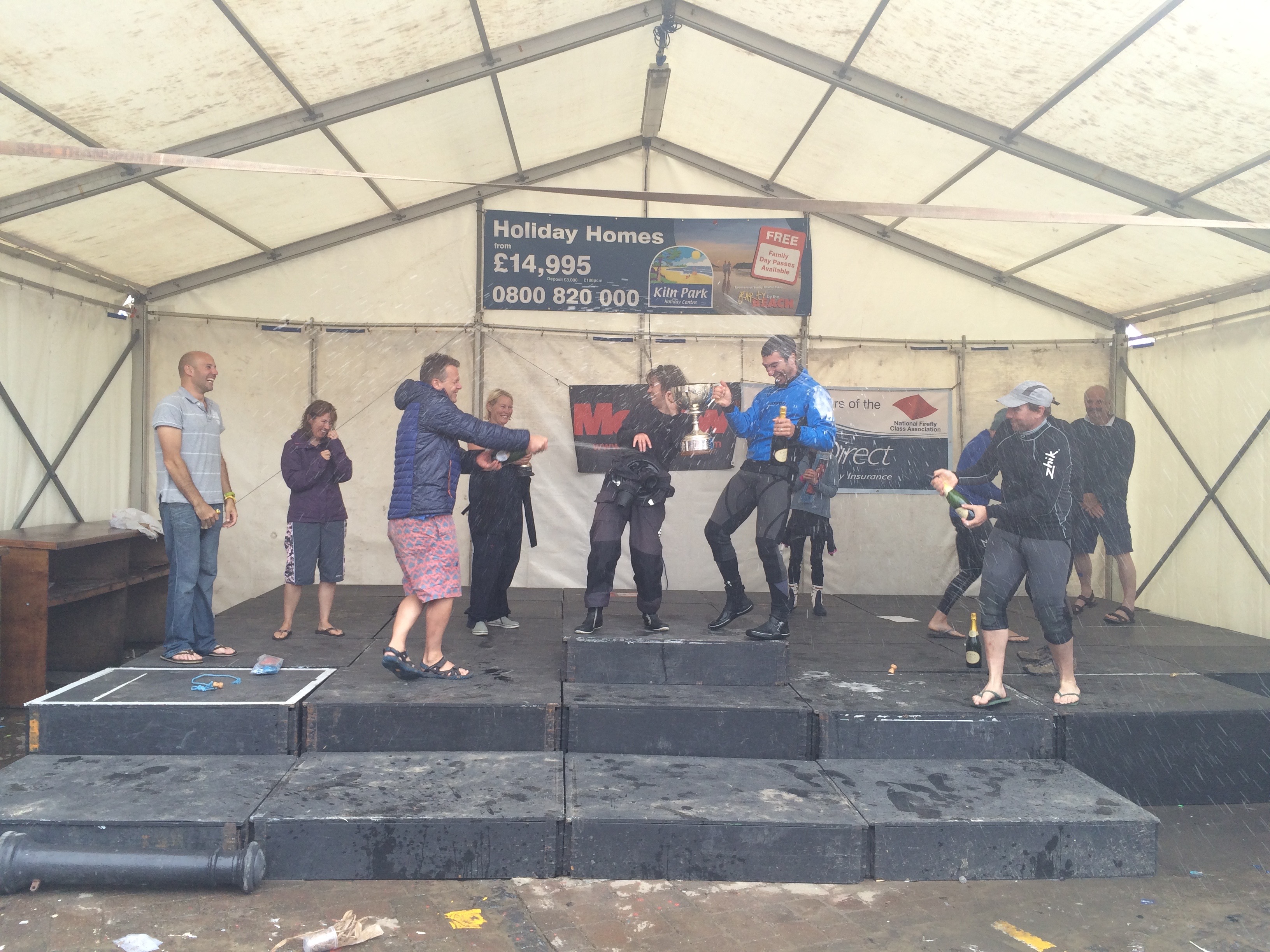 Wednesday of the Firefly Nationals has become known as “Big Wednesday”. It is the day of the Ralph Gore Challenge Cup, an epic 12 mile race around triangles, followed by prizegiving, and Pimms and fancy dress party (theme “come as the name of your boat”.

The racing went as follows..

Race 6 for the Sir Ralph Gore Challenge Cup (words Ben Lumby)
The fleet obediently left the beach at 10am for the long sail in light airs  down to the eastern bay racing area, only to wait two hours for the gradient breeze to fill in from the WNW. A few sore heads from the crews’ union antics cursing the missed opportunity for a couple extra precious hours in bed.

After three failed attempts the fleet finally started under black flag to the cheers of the race committee aboard “Apatshe”. A predictable pile up ensued at the heavily favoured pin end, but an unexpected right shift gave an early advantage to those on the right, only to swing left again a minute later. Such was the shifty nature of the days wind.

Roger and Finn Morris flew into the lead at mark 1 with the Panks close astern and usual suspects behind including the Vines, Wakefield/Saunderson, Davidson/Wakefield, Greaves/Hopkins, Walker/Lewis.

The reaches compressed the leaders to the second beat which proved a shocker for those that went left aiming for the mirage shift. Jono and Sara Pank held their lead to the windward mark while Lumby/Evans came from the right into 2nd place with Roger and Finn 3rd.

The wind swung 40 degrees left during the reaches, making lap 3 a procession until the race committee rotated the marks to the west for the remainder. Lumby/Evans sailing Kong from RSC took the lead from the Panks on the first reach of lap 3 and, like Race 5, were able to extend a good lead to win their second Gore. The final lap saw the wind build to 20 knots for a hard slog to the finish with the Hudsons joining the mix while Roger & Finn and Ed Smith sailing with daughter Sophie dug deep to defend their positions in the challenging conditions after 3 hours sailing.

The Marlow trophy is awarded to the winner of the silver fleet, racing on the same course as the Gore sailors. This year it was won by all girl boat 3125 “Puree” helmed by Amy Morris and crewed by Gilly Ansell who were 24th overall, followed by Tony Thresher and Mike Radford in 3127 “Oblivion Express” (32nd) and Simon Cowdell and Jonquil Hackenberg in 1729 “Delight” (33rd).

The now traditional prizegiving was held immediately after sailing, before a quick trip back to homes to prepare for the fancy dress – photos no doubt to appear on social media later