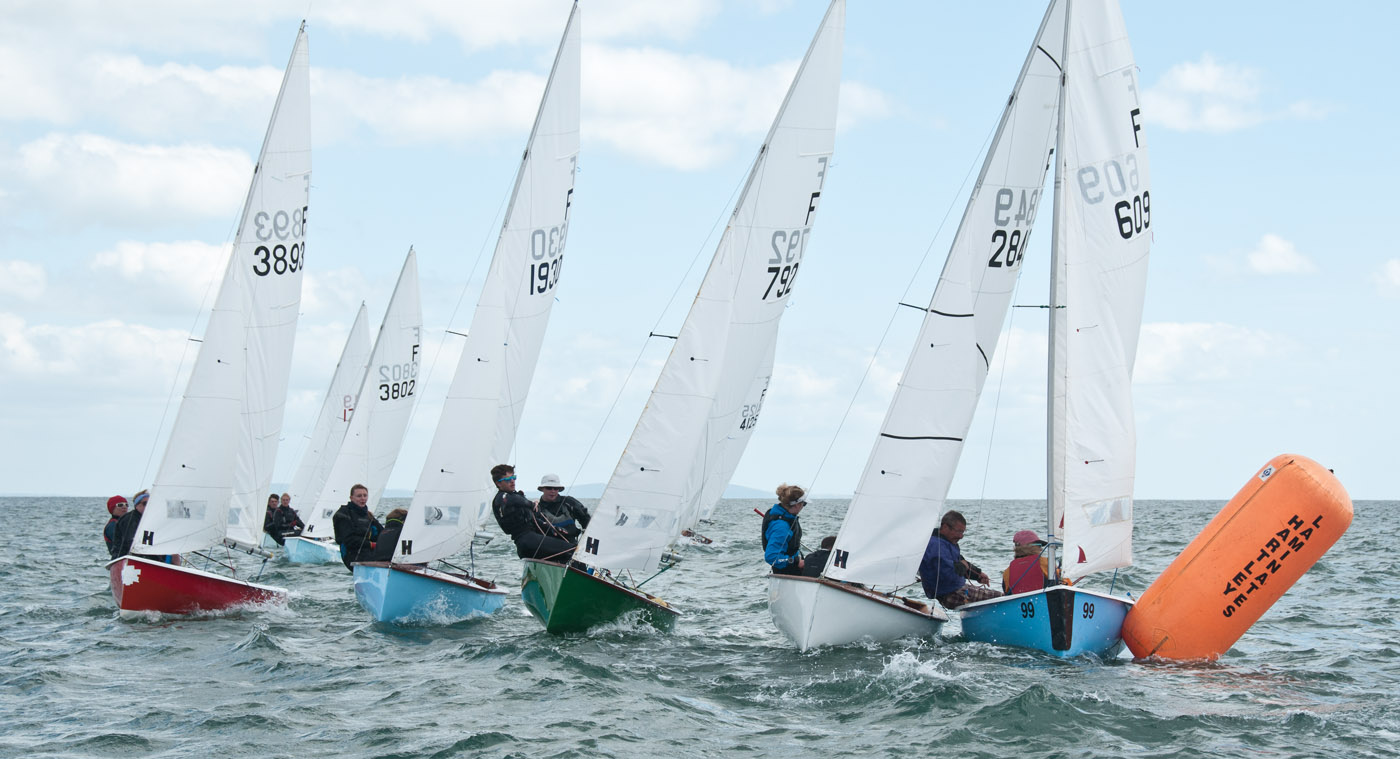 Another great day at Tenby, with sunny weather and challenging winds varying in direction and strength across the race course.

Race 5 for the Tomato Boats Trophy (words by Ben Lumby)

Tricky force 2 to 4 from the WNW with dangerous holes, strong tide and evil shifts. Pathfinders Nigel Wakefield/Emily Saunderson opened the gate with early starters Vines, Mcewans, Hudsons and Sincocks initially benefitting from a little left until a stronger right shift brought those on the right back into play. Nigel had a jump on the fleet by mid beat, but late starters Ben Lumby/Liz Evans made best use of the shifts to nick the lead from them by a whisker at mark 1. The two leaders pulled away from the pack on the long planing reaches of the first triangle to set up a close duel over the next two laps. On the final lap Ben and Liz pulled away from Nigel and Emily for an uncontested final run to the finish while Stuart and Jane Hudson cruised into third with the Vines and McEwans close behind.

Race 2 for the Sussex Silver Firefly (words Mary Henderson)
Andy Cornah and Anna Boulton started early out the gate and then went hard left up the first beat to lead for the first lap. The influence of the shifts beneath the cliffs were to dictate the fortunes, and blood pressures, throughout the race, with place changing rife.

The first two reaches saw what can only be described as champagne sailing, high was the way to go! Further colossal shifts and consequent place changing ensued over the following two laps, with the lead taken by the Hendersons aboard “Arctic Tern”, frequently threatened by wily charges from the Vines and McEwan teams. A tense final beat saw Rob and Mary Henderson take their maiden Firefly win and the coveted Sussex Silver Firefly trophy, closely followed by Jamie and Jo McEwan.

A crews’ race was held, for those with the stamina, immediately after Race 2. This was won by David Eliis/Evie Snedker, followed by William Davies/Alex Baxter and Hollie Marton/Dom Johnson in third.
A relaxing evening of crew unionising awaits the fleet this evening before they coax their hungover heads around the famous long distance Sir Ralph Gore and Marlow course tomorrow.