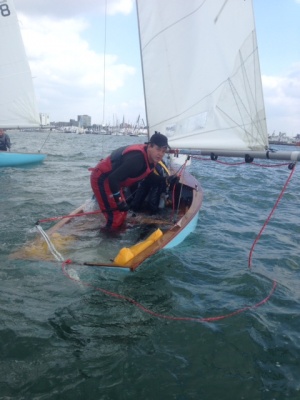 Stuart Hudson persuaded Sally Wakefield and current National Champions Paul and Laura Kameen to represent the Firefly Class at this years Battle of the Classes at the Southampton Boat Show.

Stuart Hudson persuaded Sally Wakefield and current National Champions Paul and Laura Kameen to represent the Firefly Class at this year’s Battle of the Classes at the Southampton Boat Show.

Full of confidence in what was a formidable team, hopes were high as they surveyed the course which had the windward mark set under a cliff which was the side of a cruise ship.

Stuart and Sally succumbed to a slam dunk shift and capsize whilst testing the first beat. Luckily Pete Barton was on hand to capture the moment for all.

There was no more testing to be done as the boat was only just bailed in time but spirits weren’t too dampened as the pair set off 14 minutes behind the Mirror, both nailing the start at the favoured end.

Unfortunately both boats then suffered a bit of a becalming on the first beat (bit being an understatement) with Stuart and Sally worst affected.

They realised that the game was all but up when passed by a GP14 at the end of the 2nd leg which in a 90 minute pursuit race really isn’t a good sign. Then followed a constant stream of all manner of boats and classes. The Mirror remained a distant unattainable goal.

The two continued stoically on and did finish close together in 24th and 25th with Paul and Laura just ahead of Stu and Sally.

Quote of the day from Laura Kameen to Stuart Hudson “Thanks for that Hud!”

Having failed to promote the Firefly Class in the previous race (at all really!) the duo had a steely serious look in their eyes to rescue some pride for the class and both positioned themselves in the front row using team racing skills dragged deep from muscle memory.

The wind had dropped a bit and was shifty and the Firefly came into its own as both boats picked their way up the first beat to round 2nd and 3rd leaving faster boats in their wake. Only a Scorpion rounded ahead of them and off they set down the first reach grinning like Cheshire cats.

The faster boats slowly recovered but 15 minutes (half the race) had already passed before the N12’s caught them and a lot of the fleet never did. Stuart and Sally stayed just ahead of PK and Laura till the end.

As always with general handicap nobody has a clue who won so we all began the long sail back to pack up and go home.

Back on the shore the N12’s were whizzed off in a rib to the boat show arena to collect their Battle of the Classes 1st place prizes to great acclaim and PK and Hud and crews sloped off home with their tails between their legs.

In a strange twist to the day Hud was contacted later to be told by the organisers that he and sally had won an RS Tera for Keyhaven Y.C. for winning the Barts Bash race on handicap. Who’s laughing now Peter Barton!

Results below to prove that the Firefly really is the best class in the world with the best sailors. We’ll just forget that the Battle of the Classes ever took place!