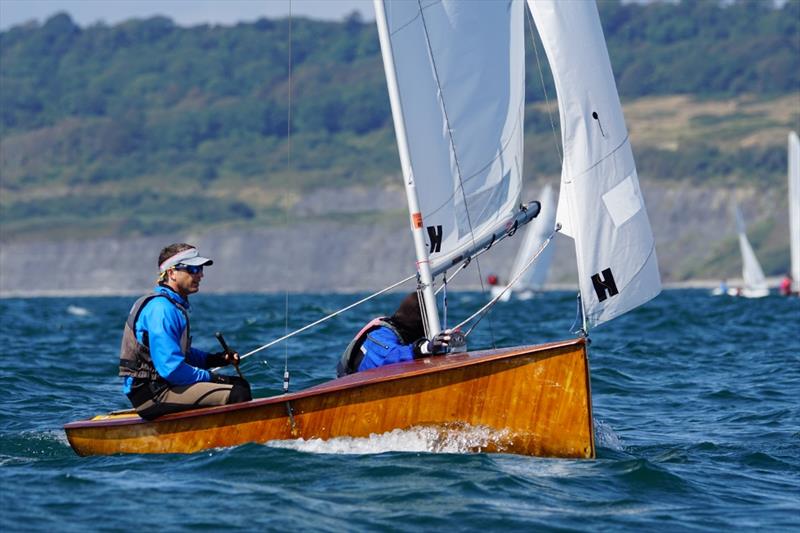 Thursday dawned with a bit more breeze than forecast, sun and marvellous Lyme Bay rollers. The fleet were blessed with the best conditions.

The two major championship contenders Jono Pank and Helena Lucas in F1954 and Stuart Hudson and Emily Walters in F3850 ‘Fursty Ferret’ engaged in battle royale and were soon out front in first and second. Dan and Cameron Vincent in were able to prove that their podium result earlier in the week was no fluke and pulled through into third. David and Betty Sincock put in another useful 4th place.
Firefly Nationals at Lyme Regis day 5 – photo © Frances Davison

One thing we can say about PRO Chris Turner is that he and his Lyme Regis team are incredibly good at setting absolutely square start lines so that neither end is favoured. The start line for race seven for the Olympic Trophy was a perfect example of this.

Ben Lumby and Liz Evans in F2659 ‘Kong’ started in the middle of the line, Jamie and Jo McEwen in F3615 ‘Skirmish’ also got a good start. Both went for an early tack onto port, narrowly passing those who had opted for the boat end of the line. The bold start strategy paid off as it gave them lots of clear air to focus on the waves and shifts.

While the majority of rest of the fleet tacked up the middle or went left, Kong struck off to the extreme right. At the top mark it became clear how much this hard right gamble had paid off as they rounded well in the lead followed by Skirmish and Guy “Notorious OAP” Davison and Sally Wakefield in F3318 ‘Lynestra’.
Firefly Nationals at Lyme Regis day 5 – photo © Frances Davison

Showing the pace and technical expertise that has won them so many South Western Championships, Kong commanded the off-wind legs. On the next beat they again took advantage of the nice pressure, less tide and good angle at the mark on the right of the course. Kong tacked back just short of lay line and came back to round in first. Lynestra followed in a close second and Skirmish third.

As the front three pulled further away from the rest of the pack Lynestra stuck to Kong like glue. The two boats engaged in a close battle up the second beat, with Kong narrowly retaining the lead to round just in front.

Downwind there were some lovely surfs to be had and the whole fleet rounded the bottom mark with huge smiles on their faces. By then Kong and Lynestra were comfortably ahead enough that the race was between the two of them. Ben and Liz were able loose cover Guy and Sally to finish. Skirmish blasted home in a comfortable third.
Firefly Nationals at Lyme Regis day 5 – photo © Frances Davison

While the focus was on the front three, the battle for the Championship was going on just behind. Shortly after the start Stuart and Emily in Fursty Ferret had tacked under the bow of Jono and Helena in Pogie. However, Pogie was able to hold and climb off to round the top mark ahead. The Ferrets managed to find a lane to pass on the top reach and took the inside track on the run. Then Fursty Ferret made a rare mistake, pushing a bit too hard, and were forced to save a near certain capsize. This gave Pogie the opportunity to move across and get back between the Ferrets and the bottom mark. The two boats rounded the mark barely a boat length apart. From there Pogie gave no passing lanes. “I was never going to let Hud sail over me” said Pank. For the next two laps the two traded blows. Pogie able to pull away up the second beat but Fursty Ferret closed up on the run. The two of them rounded the last mark neck and neck. Up the final beat Pogie closely covered and the two of them finished in sixth and seventh to go onto equal points going into the final day.

Ronstan Buddies for Thursday were Hamish Walker and Pippa Girling and Birthday Girl Emily Heath and Crew Mike Stephens for Race six and Alex Baxter and Ella Vincent and Malcolm and Ella Forrest for race seven.

Friday, one race, all to play for.