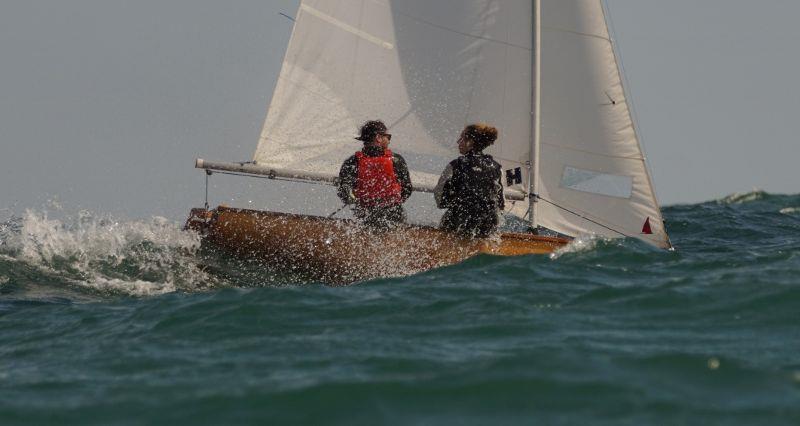 Day two of the 2019 Firefly Nationals was full of unexpected thrills and spills. The wind had been forecast to drop but clearly the weather gods hadn’t got the memo as conditions were still a solid force 5 with waves which seemed just as big as Sunday.

The gate start for Race two got off with only a pinch of drama courtesy of a massive bear-away-capsize right behind the gate boat by Bournemouth University’s Matt Green and Marika Curry in F1576 ‘Inkoosan’.

The early boats out were initially lifted but those that kept going were rewarded finally with a header to come back on. Stuart Hudson and Emily Walters in F3850 ‘Fursty Ferret’ did best out of this and rounded the windward mark first closely followed by Alex Baxter and Ella Vincent in F2246 ‘Scruffy’ and then the chasing pack.

Hairy moments on both runs and tough on legs upwind the Ferrets hung on to win the Silver Firefly with Jono Pank and Helena Lucas in F1954 ‘Pogie’ second and Scruffy third. Jamie and Jo McEwen in F3615 ‘Skirmish’ were fourth with reigning National Champs Guy Davison and Sally Wakefield in F3318 ‘Lynestra’ fifth.

The first line start of the Championships saw a good Force five. Somehow the race got away first time. Naill Houston and George Zavos in F3414 Tigger got the best start, chased up the beat by Chris Kameen and Jenny Johnson sailing F2937 ‘Smutty’. Fursty Ferret also did well on the left side of the beat along with Andy and Jenn Cornah in F888 ‘Desperado’. At the top mark Tigger led with Ferret second and Smutty third.

The Ferrets led by the top of the run but boats were gaining huge distances depending on being able to surf a wave but also balancing that with staying safe! Several jib sticks went overboard (shout out to sponsors Selden and Coast Watersports).

Tigger lost their bounce on the second round leaving Smutty to pick up second with Pogie coming through for third.

After an incredible first two days sailing on great courses and big rollers the forecast is looking all change for day three with wind set to drop and all to play for. Can anyone stop the Ferrets being more ‘first-y’ than ‘fursty’?