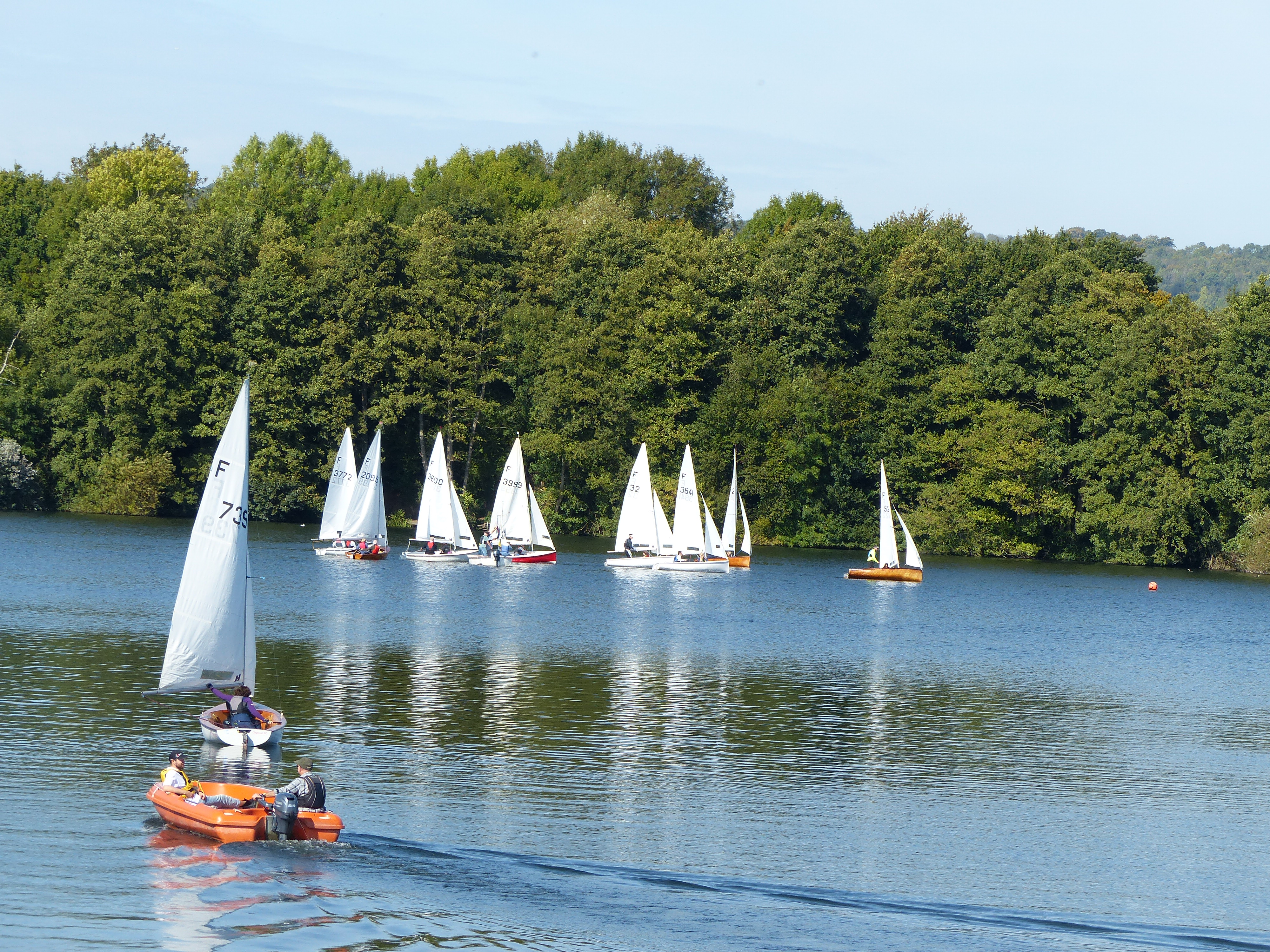 Lovely weather greeted the competitors for the Chipstead SC Firefly Open Meeting which was shared with the Enterprise open meeting. Lots of sunshine and warm weather combined with a light south easterly breeze and some puffy shifts made for ideal sailing weather and, being Chipstead, there were many opportunities for overtaking, losing places and general overworking of the little grey cells.

Ben Green crewed by Fi Edwards, Matthew Dalton crewed by his daughter Anna and Alex Ogilvie crewed by local sailor Sarah Harwood were the visiting contingent and the local talent of 6 boats was headed up by Dom Johnson crewed by daughter Izzy.

The very experienced race management team was provided by the Chipstead SC Comet fleet and they made a great job of a tricky wind direction to ensure good beats from committee boat starts and some interesting downwind legs.

Race 1 saw Dom & Izzy disappearing into the distance followed by some close racing between Neil Banks & daughter Jennie Chapman, the third father daughter combo (although of a different generation!) fighting it out with Matthew & Anna for second place. Matthew & Anna had it all wrapped up when approaching a transit line finish but misjudged the line and Neil & Jennie stole through for second. Peter Lanham & Wendy Seaton fought off Ben & Fi, Rob Ellis & Jane Cassidy and Tony Meyrick & John Savill. Claire Shea sailed single handed in races 1 and 2 whilst awaiting the arrival of her daughter Emma from another event and was deemed retired which promoted Alex & Sarah a place whilst recovering from ‘a late start’.

Race 2 followed a similar pattern with Dom & Izzy off and away but there was a mighty struggle going on for the next three places. Neil & Jennie looked to have second in the bag but were caught and overtaken by a very quick Rob & Jane and Ben & Fi, who by now had got their mojo back. Matthew & Anna backed up their good performance in the first race by coming in fifth. This was to be their last race as they were required to get away to collect their other daughter from another event. Unfortunately Tony & John had been hit by one of the puffy shifts whilst tacking and the resulting capsize ended with an arm injury to Tony, thus finishing their day.

Race 3 saw a familiar pattern at the front except that this time Neil & Jennie were on fire, closing on Dom & Izzy many times during the race but just unable to pass and keep the lead so had to settle for second. This race ended with a lot of separation between the boats but Ben & Fi wrapped up third with the rest of the local boats fighting it out for the minor places.

Race 4 had the added spice of a battle for second place overall between Ben & Fi and Neil & Jennie with the latter needing to finish third or better and not more than one place behind Ben & Fi. As was the pattern of the day Dom & Izzy sped off but were seen from time to time to be struggling in some of the wind shadows that were developing in the Chipstead narrows. However their boat speed improved when Izzy took the helm for the middle part of the race to gain an unassailable lead. Neil & Jennie were in a reasonable third place when they then got buried by a bunch of windward starboard tack boats and were left wallowing in a windless dead man’s gulch to eventually emerge some time later, last by a large margin.

In the meantime Ben & Fi were up and away in a safe second, never to be challenged again. With a lap to go, and half of the lake behind the bunch of boats ahead, Neil & Jennie found their own private breeze and using their local knowledge managed to close the gap. One by one they picked off the boats ahead and with only the final long reach and short beat to go they just held off the fourth and fifth boats to promote themselves to the third they needed. Claire & Emma took a great fourth followed by Alex & Sarah, Rob & Jane and Peter & Wendy.

Overall Dom & Izzy were clear and deserved winners and Neil & Jennie were chuffed to bits to have just taken second place by a single point from Ben & Fi who took the final podium place.

Congratulations all round to the race officer and his team for great courses, on-time starts and finishes and for organising some wonderful weather. Also, many thanks to the visitors who made it to Chipstead. Finally, thanks to the Chipstead Fireflies Bakers who did their usual sterling stuff to produce a great selection of their intergalactically famous cakes which were scoffed in no time flat!

Next year’s open meeting will be on 24 September 2018 and hopefully those M25 / Vines Trophy competitors who didn’t make it this year will get it into their diary early for next year and support the local Firefly fleet at Chipstead.