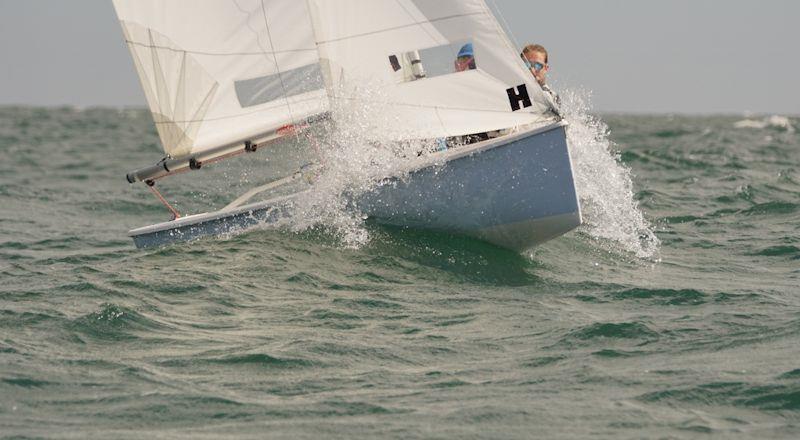 Thursday at the 2019 Firefly Nationals had seen a huge day on the water followed by a massive night in the bar for the BBQ and legendary Firefly fancy dress party. The band, the fantastic Leggomen had helped the fleet find their second wind after an exhausting two races in some great Lyme Bay rollers. For the majority of the sailors this meant tired hiking legs, very sore heads and the scattered remains of discarded dinosaur costumes. Only the prospect of a final race in the dreamy sailing conditions in Lyme Bay mitigated the hangovers.

But the weather gods seemed to have other ideas. The fleet arrived to the club in glorious sunshine to find the AP hanging limply from the flagpole and not a breath of wind. It was obvious that, at the very least, we were in for a bit of a wait.

In the boat park all talk was of the battle for the championship. The momentum had shifted away from early leaders Stuart Hudson and Emily Walters in F3850 ‘Fursty Ferret’ to Jono Pank and Helena Lucas in F1954 ‘Pogie’. Overnight Pogie had led by a single point and, if racing was to be canned, would take the title. While Hud and Jono bristled with nervous energy, their crews weren’t letting the pressure show. Emily prepared for her day on the water with ice cream (If you’re in Lyme make sure you check out Baboo Gelato) and yoga while Helena relaxed with a cup of tea and a good book.

When the Firefly class lost legendary PRO Graham “God” Henderson earlier this year it was lamented that we might never again have a race officer with the ability to divine the exact weather window in which to send the fleet out to get a race off. As the clock ticked down to the last time to launch the fleet were getting restless, anticipating cancellation. The water was still glassy when the AP was dropped at 13:08 but God must have been speaking through the LRSC race team as it would turn out they would manage, almost miraculously, to send the fleet out at exactly the right time to find an un-forecast wind window in which to run racing before the breeze clapped out again.

How quickly all 53 boats got off the beach and to the start line was another testament to the excellent event management of Lyme Regis SC. The fleet were in great spirits as pathfinder Hugo Burrows and Joe Scarborough in WOSC3 bobbed past with horns of shame jauntily perched on their too-young-to-get-hungover heads to start the race.

Right from the first gun a furious match race had ensued between the championship leaders and the mid-fleet found themselves ducking and diving to stay out of the way and maintain clear air up the beat.

The front pack took advantage of a windshift to make an early break-away at the top mark. They would maintain a sizeable lead over the peloton containing the championship leaders, and the rest of the fleet to the finish.

John Greenland and Ruth Guy in F2296 ‘Falken’ made a strong early charge for the lead but were outmaneuvered by outgoing chairman Ed Smith and crew Izzy Bretherton in F2803 ‘Grendel’ and Dave and Betty Sincock in F973 ‘Spiderling’.

Alex Baxter and Ella Vincent in F2246 ‘Scruffy’ had more luck. Taking advantage of Alex’s “Mad pond skills”, they managed to break free of Chris “CK” Kameen and Jenny Johnson in F2937 ‘Smutty’ and last year’s champions Guy “Notorious OAP” Davison and Sally Wakefield in F3318 ‘Lynestra. Together with Ben Lumby and Liz Evans in F2659 ‘Kong’ they clawed back on the leaders.

Ed and Izzy however, it turns out, had built an insurmountable lead. Grendel took the race by about 100m from Spiderling. Then, in a victory for youth and enthusiasm over experience and treachery, Scruffy glided in behind to third – a result which allowed the speedy students to leapfrog Smutty and Lynestra on the overall leader board and win the battle for the final podium place. Falken swooped back in to take fourth.

Behind them the on-the-water tussle to be crowned 2019 National Champions was reaching its thrilling climax. Pogie managed to cross the line a whisker ahead of Fursty Ferret but, with a protest by the Ferrets on them the fight for the championship was far from over.

Ashore it emerged that Hud and Emily had protested Jono and Helena for hitting the gate boat and the boat to leeward during the start and there was discussion over whether appropriate penalties had been taken. Just when it was looking like the battle royale on the water might be followed by a battle royale in the jury room, in rolled the race officer with clarification of the rules and the helm of the gate boat with the confirmation that Pogie had indeed brushed their sponson.

Jono and Helena hadn’t realised that the Firefly class still maintain the rule that a boat which makes contact with the pathfinder or gate boat must retire from the race and had thought the transgression exonerated. The pair sportingly accepted their mistake and conceded the championship leaving a shellshocked Hud to process having won his eighth Firefly National Championship and Jono to pick his Duckhams dress for throwing it all away!

The news spread through the boat park like wildfire thanks to a particularly jubilant Birmingham University contingent. Hud is a proud ‘Brumalum’ and still coaches the team and Emily has just finished her final year. Hud just about managed to get out that he was “chuffed to bits to win – it was a very special week” before they were engulfed by a swarm of cheering teammates.
Stuart Hudson and Emily Walters win the Firefly Nationals at Lyme Regis – photo © Frances Davison

After a speedy pack-up and customary boat park clean up it was on to the prize-giving in the packed marquee.

Before the prizes could be doled out to the winners, it was time to present the final Ronstan Buddies prize. Their second place finish in the final race secured Dave and Betty Sincock and buddies Georgie Huston and Renato Jasi in F2925 ‘Piglet’ the final Ronstan t-shirts of the championship – something both crews had been aiming for all week!

Then it was on to the heaving table of prizes for the main event. The eye-catching keepsake trophies were provided by Oakdene Designs and featured a print of Jess Douglas’s beautiful championship poster printed on bent metal. The trophies were joined by a whole heap of amazing goodies from generous sponsors Ronstan, Marlow, Hyde and Lyme Bay Winery.

First up were the thank-yous, and for such a brilliantly run event it was a long list! The Firefly class have had a long-term commitment to sourcing their thank-you gifts sustainably from the local area. This year we were lucky enough to secure the support of Lyme Bay Winery whose multi-award winning wines and ciders are handcrafted in the hills above Lyme Regis and are – as the Firefly committee can attest – every bit as delicious as anything from France or Italy.

Events organiser Tony Fastnedge and his team were pleased recipients of bottles of Lyme Bay Winery’s multi-award winning Shoreline while bar manager Trish (arguably the most important person at the championship) also got a bottle of strawberry wine – perfect to sip in the sun while recovering from the onslaught of over a hundred very thirsty Firefly sailors!

The safety boat crews were chuffed to be presented with a large box of Jack Ratt Scrumpy Cider which they received wearing the pathfinder’s sparkly unicorn horns of shame.

Then it was on to the prizes. Stuart Hudson from Spinnaker Club and Emily Walters from Birmingham University sailing F3850 ‘Fursty Ferret’ were crowned national champions and winners of the Sir Richard Fairey Points Cup. They also claimed the Port of Plymouth Trophy for race one, the coveted Sussex Silver Firefly for race two, Felixstowe Ferry Trophy for race three, Colin Whittle Trophy for top crew and Geriatric trophy for top helm over 50. Quite an impressive haul!

Second place Jono Pank and Helena Lucas from Imperial Poona in F1954 ‘Pogie’ laid claim to the R.A.F.S.A. Trophy for race four, the Tomato Boats Trophy for race five and the Avon bailer for race six.

Third overall, top students and winners of the Chris Lynham trophy for first under-21 went to Alex Baxter from Cambridge University and Ella Vincent from Manchester University in F2246 ‘Scruffy’. The pair were thrilled with their Ronstan 55L Weatherproof Crew Bags which will be perfect for team racing in the new academic year. They were enthusiastically congratulated by fourth place Chris “CK” Kameen and Jenny Johnson from Imperial Poona in F2937 ‘Smutty’.

The golden oldies were well represented at the top of the leader board but it was last year’s champions, Guy Davison from Llangorse and Sally Wakefield from Spinnaker Club sailing F3318 ‘Lynestra’, who were awarded the Ultimate Trophy for highest place of the oldest crews in fifth.

The Olympic Trophy for points race seven went to Ben Lumby and Liz Evans from Restronguet in F2659 ‘Kong’ and Ed Smith and Izzy Bretherton from Imperial Poona in F2803 ‘Grendel’ took the Mike Nye Memorial Trophy for the final points race.

10th place Dave and Betty Sincock from Restronguet SC in F973 ‘Spiderling’ were awarded the Veteran’s Trophy For highest place over 40s in the Gore.

At the other end of the age spectrum, the Sternlight Award for top institution-owned boat went to Giles and Elliot Kuzyk from University of Birmingham who sailed an absolute blinder in their university tub to finish just outside the top ten. And 15th place for Hugo Burrows and Joe Scarborough ensured the Restronguet Ovaloid for the top 18 and under helm will remain at West Oxfordshire Sailing Club for another year.

One place down, in 16th, the Deben Plate for top Lady helm was won by Jenny Smallwood crewed by Phil Aldous from Manchester University sailing F3181 ‘Top Dolly’. Rumour has it Lyme Regis was the last outing for the pair in the borrowed “green speed machine” as they’re about to bite the bullet and become Firefly owners.

The Hyde Sails prize for best improver went to 17th place Matt Thornton and Laura Bevan from University of London in F3671 ‘Purple Dorris’. The new jib was particularly well received by Matt who, like any young man in love, is desperate to impress Laura’s dad!

For the first time in a long time the two hotly-contested team awards had clear winners. The Tolly Cobbold Cup for top club went to the Imperial Poona Yacht Club represented by Jono Pank and Helena Lucas, Chris Kameen and Jenny Johnson, John Greenland and Ruth Guy and Ed Smith and Izzy Bretherton. The Poona were graciously cheered by runners up Birmingham University and West Oxfordshire. The overall Ronstan Buddies prize was claimed by Hamish Walker and Pippa Girling from RNSA in F2282 ‘Border Riever’ and Oli Burrows and Nicole Perris from West Oxfordshire SC in F792 ‘Rissa’

The prize-giving closed with thanks from Lyme Regis SC to the class. The club presented the “new logo” Firefly flag which had been flying from the clubhouse during the championships to Nationals organiser Jim Bramley along with the invitation to come back soon – we definitely will!

A3 Championship Posters are still available from Jess Douglas for £7 including postage. Please message the class association on Facebook for payment details.