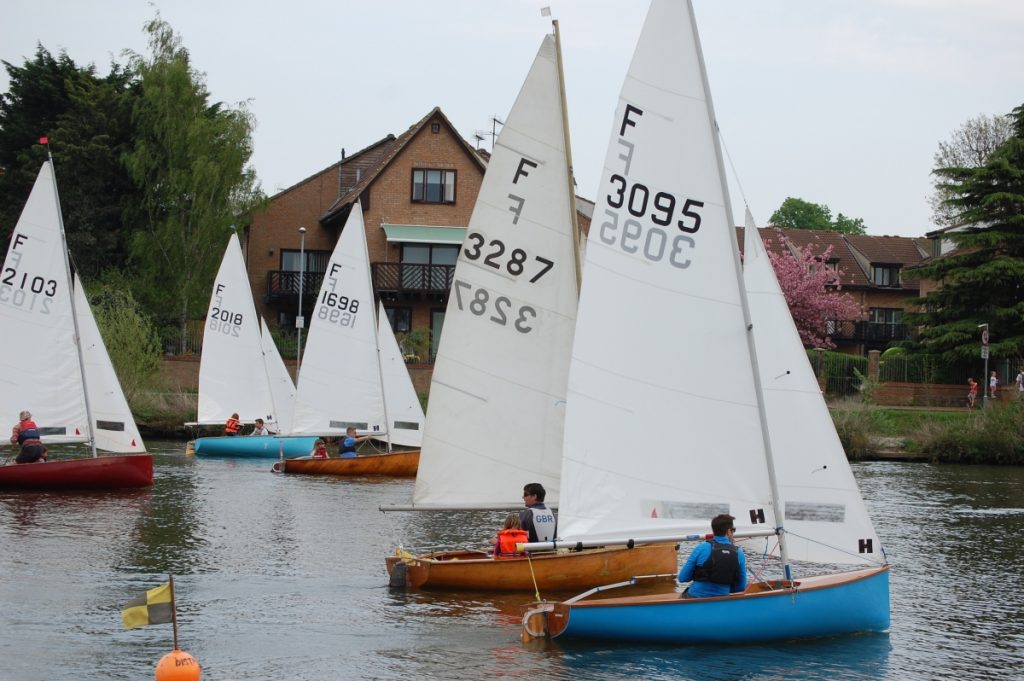 Saturday dawned – a fabulous day, simply perfect for the Firefly Junior Cup at Tamesis Club on the Thames. After several weeks of inclement weather, lacklustre winds and a raging stream on the Thames it looked set for a wonderful afternoon’s sailing. Unfortunately a large mass of grey cloud hovered menacingly over the Thames for much of the afternoon and left the river nearly windless! However, one full race was successfully run and a second completed the day (having released competitors from the restrictions of rule 42 – no rocking or other form of propulsion) and great fun was had by adults and children alike.

The afternoon started well, and the first race got underway with a light but workable F1-2 and bright sunshine.

As the excitement mounted in the countdown to the start the children all made an excellent job of lining up and got away cleanly from the line.

Josie (F3287) made a great start and along with Jemima (F3095) made a great dash for the first mark upstream at Canbury. After a clean rounding they then set downstream toward the Lensbury mark. Behind them Sara (F1698), Ludo (F2018), Ed (F2103) and Anna (F3841) battled it out putting in a couple of tacks to clear the mark and set off in hot pursuit. Unfortunately as the back markers rounded the downstream mark the ominous looking cloud drifted in from the West and the humidity rose – with it the wind began to drop. Making way upstream in a dying breeze is quite an art, and the young helms all did a really splendid job of remaining focused and patient. Up front Josie and Griff (F3287) used their local expertise to hug the Middlesex bank up to the clubhouse before cutting back out into the stream. Behind the pack closed up and Ludo (making way up the Surrey bank) ate into Jemima’s advantage – who was battling up the middle of the stream. By this stage Josie had pulled out an unassailable lead. With the box sounding the shortened course signal Josie made for the line and the win. An excellent performance – all the more remarkable given that Tin Bin was only taken out and rigged for the first time in many years on Friday afternoon (she was kindly loaned by her owner for the event).

Behind there was quite a lot of action as the helmsmen and women worked their way up to and around the Canbury mark – with patience (and a little luck) leading to the remaining boats rounding and making as swift a run toward the line as possible.

Ludo had done a great job and positioned himself into second place – with his crew working hard at eeking out the most from the jib and keeping the boat healed nicely to leeward. The podium was then Sara who had sailed excellently to get into third on the tough beat up the river.

Everyone then headed in for a well-deserved break, cake and a drink.

The long slow – painful – drift toward the top mark!

And they are off!

The start of the second race was delayed whilst the race officer and officials tried to make head or tail of the dying wind and how best to get a second race for the eager crews to compete in. After much sucking of teeth and vain hope a plan was hatched. Rule 42 (preventing propulsion by rocking, paddling and general shenanigans) was firmly put aside and paddles sourced for those who didn’t have them. In order to make things even more interesting a decision to make adults paddle upstream and children downstream added to the challenge. To make things slightly more dramatic the up and downstream marks were moved closer in and a triangular ‘olympic’ course set.

From the start it was obvious that competitive juices were coming to the fore. So much so that Florian had decided to add an addition stowaway to Ella and an additional paddle. Undaunted, Ludo and Paul set a furious pace in pursuit. There was much happiness and excitement as places changed hands too often to keep track of, resulting in an exciting (albeit slightly unconventional) second race. On the approach to the line Ed and Tim demonstrated their excellent paddling technique to resoundingly thrash Anna and Matthew to the line.

Florian and crew (the former showing his competitive spirit!)Start of second race (a distinct lack of application of the racing rules of sailing)

The dads take a rest whilst the youngsters get paddling!

Having circled back to the pontoons outside of the clubhouse it was obvious that the conditions wouldn’t allow a third race – with all traces of wind vanishing fast and hungry mouths in need of cake, juice and fun on the lawn.

Whilst the adults packed away the cries of happy children playing football, and generally having a lovely time by the river could be heard.

Shortly after 4:30pm the crews were joined by a number of Cadets and their families in the clubhouse for the presentation of prizes (whilst a few drops of rain made an unwelcome appearance).

(Results adjusted to reward those children who helmed throughout)

The ‘all things allowed’ race

Finally, the all important ‘cheering prize’ was shared between Ruth Dalton and Freddie Guy – who’d delighted those watching on the shore with a continual stream of conversation!

All the winners (well nearly) with prizes!

Despite the weather it is fair to say that a great time was had by all and our thoughts and hopes turn to tomorrow’s Elizabeth Cup and the next running of the Junior Cup next year! Congratulations to all the juniors who helmed (mostly) throughout the first race and demonstrated great patience and fortitude in difficult conditions to make the day such a success. Well done.

All those who took part, and especially the Class Captain, would like to thank Carolyne Vines for exemplary wielding of the OOD position throughout the afternoon – especially for ensuring that we got some racing and plenty of fun into the event, Sue Harris for manning the race box, Chris Balmbro and Andrew Forbes for manning the safety boat (fortunately not put into action in anger – bar moving racing marks at short notice).