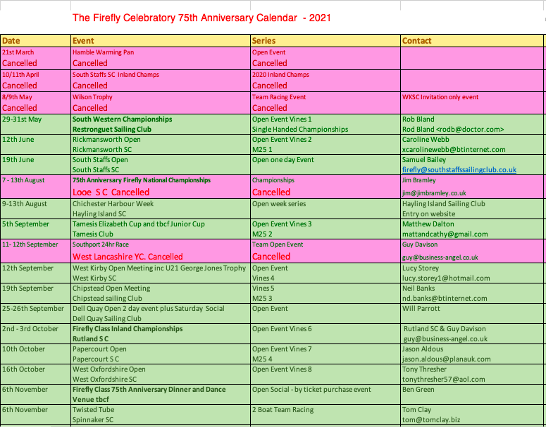 Despite the loss of our nationals, we have added a number of events for the year and the autumn looks amazing! But looking at the immediate summer ahead, look no further than Chichester Harbour Week being held at Hayling Island SC, 9-13th August! With no less than three National Champions entered and a host of others, and guaranteed warm weather, I have it on good authority, it will be a cracker of a week. 13 plus fireflies entered so far and more to follow.

After this week the September onwards events are numerous and spread around the North, East, London, and South of the country! Tamesis on the river Thames, West Kirby on the Dee estuary, Chipstead on their lake, Dell Quay in Chichester Harbour upper reach, the Inland Championships at Rutland – a massive inland reservoir, Papercourt and West Oxford events on inland waters and not forgetting Spinnaker’s opens in the New Forest. Something suitable for everyone!