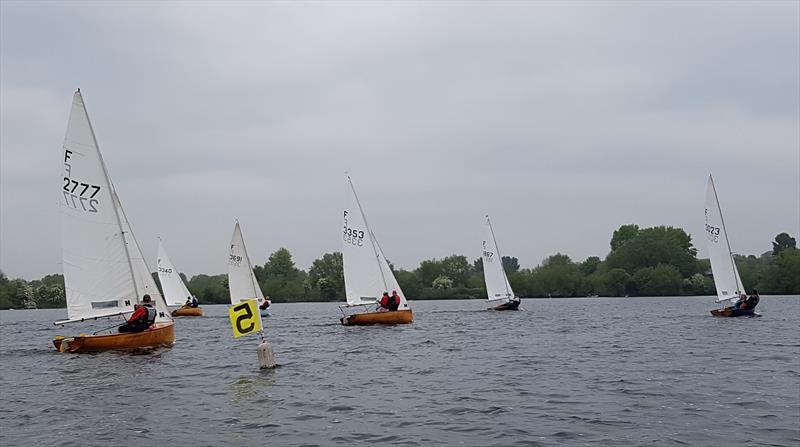 A select group of visitors joined the four enthusiastic members for the annual Firefly Open meeting at Rickmansworth Sailing Club on Saturday 6th. A little more sun would have been nice but it was warm and dry and there were no complaints about the perfect force 3 blowing majestically across the lake.

After relaxed rigging and free bacon sarnies the first race got underway in a slightly less relaxed manner. For a club so steeped in Firefly sailing and a long history of team racing it was inevitable that there would be some start line shenanigans, with Richard and Caroline Webb trying to take Steven and Arthur Greaves over the line at the start. This resulted in the Webbs being over the line and the Greaveses ducking at the last minute to get away cleanly, chased hard off the line by experienced Firefly campaigners Barney Smith and Rachel Crebbin from Hamble River SC. There was the usual battle around the first lap with Ann Allen and Wendy Barnes using local knowledge to good affect. The recovering Webbs were fighting hard with Bevis Field and Claire Stubbs and by the line the Greaveses had pulled out a comfortable lead over Smith & Crebbin and Filed & Stubbs.

The result repeated itself in the second race, with a smaller gap and Steve Greaves now being crewed by daughter Madeleine. After a well deserved lunch of a pint and a ploughman’s racing recommenced but with the medal places largely settled there were a few changes afoot. Eight year old Arthur Greaves was now helming dad Steve whilst Caroline had wrestled the tiller back from interim helm, husband Richard. Barney and Rachel took early control on the race and held this until the end.

First and second overall were settled before lunch but team Field / Stubbs put in a 2nd in the last race to cement 3rd overall, with the Webbs coming in fourth overall. The local derby was won by Ann Allen and Linda Gibbons pipping Wendy Barnes and Chris Milner. Gallons of tea and home-made cakes were devoured by all involved to finish a great day on the water.

Rickmansworth Sailing Club now looks to the coming weekend for their Push The Boat Out day on Saturday 13th. The 2018 Firefly Open will be over the weekend of the 12/13th of May.