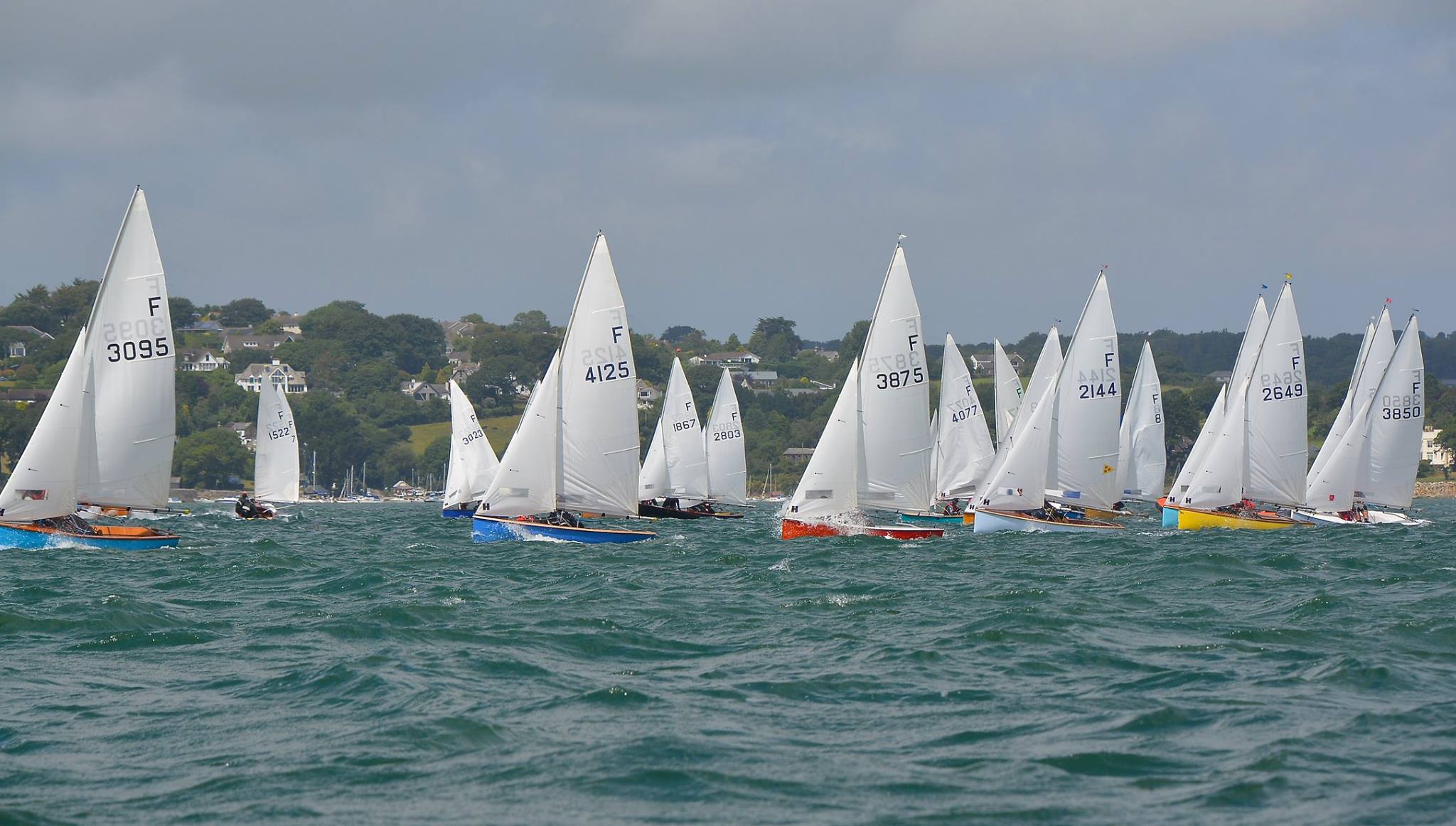 They say the best things come to those who wait – that probably isn’t the case for this extremely belated Firefly South Westerns report but you should read on just in case!

The annual Firefly South Western Championship hosted by Restronguet Sailing Club and sponsored by Ronstan took place over the late May bank holiday with twenty five boats racing on the waters of the Carrick Roads. There were a few notables missing, the slightly depleted numbers didn’t dampen the enthusiasm of what was otherwise an exceptionally strong fleet. The story of the championship was just how close it was with seven races yielding seven different winners and (for the second year running) top five separated by just seven points.

Restronguet is popularly considered Firefly nirvana and as everyone arrived at the club it definitely felt like heaven on earth. Saturday’s perfect conditions rewarded those who made the journey down to join the ever-competitive home fleet with racing in almost unbroken sunshine and a perfect 10 knots. Race one was closely fought. Nigel Wakefield and Emily Saunderson in F3007 ‘Tip Top Too’ started well and were never crossed, but always pushed hard by Chris Kameen and Jenny Johnson in F2947 ‘Smutty’ who had a precious ten boat length lead on the peloton. Jamie and Jo McEwan in F3615 ‘Skirmish’ in third lead home reigning National champ Guy Davison crewed by Amy Bowden in F3318 ‘Lynestra’.

The second race favoured early tackers. Guy Davison and Amy Bowden took off like a rocket towards the cliffs pursued by dad ‘n’ lad duos Roger and Finn Morris in F3319 ‘Horror’, Steve and Arthur Greaves in F1876 ‘Cumulus’ and Alex and Thomas Davey in a borrowed Rondar. Having definitely found his pace since retiring Guy managed to maintain his lead. He held off the men behaving dad-ly until the end to prove that old age and treachery are definitely more than a match for youth and enthusiasm. The Morrises took second and the Greaves (Greaveses?) third. Jamie and Jo McEwen managed to slip past the Daveys to take fourth.

Two races down, one to go. The Committee boat took off – AP fluttering – on its now traditional tour of the Carrick Roads pursued by the fleet to find steady breeze. After about forty minutes PRO Henry Metcalf and his team did at last manage to find the elusive pocket of wind and get a third race off on the first go.


“It was fun, but Dad wasn’t hiking hard enough”.

Race Three was a battle royale between some of the classes heavy hitters. An extremely tight leading pack included defending champions from Restronguet Ben Lumby and Liz Evans in F2659 ‘Kong’, Stuart and Jane Hudson in F3850 ‘Fursty Ferret’, National Champion Guy Davison and Amy Bowden. As well as Roger and Finn Morris, The McEwens, Dom and Issy Johnson in F4234  ‘Vader’, Chris Kameen and Jenny Johnson, Nigel Wakefield and Emily Saunderson and Alex and Thomas Davey. A mid-race breakaway allowed the Morris boys to emerge victorious. Hotly pursued by lightning locals Ben and Liz and Darren Williams and Verity Slater in F3193 ‘Magic’. Unfortunately Darren and Verity had been OCS leaving Guy and Amy to make up the top three after an impressive performance on the final reach to see off the rest of the pack. Finn’s summation of the race was a very casual “It was fun, but Dad wasn’t hiking hard enough”.

Despite Roger’s hiking, the Morris’s ended the day overnight leaders with Guy Davison and Amy Bowden trailing by a single point and Jamie and Jo McEwen and Nigel Wakefield and Emily Saunderson breathing down their necks. As the sun went down the fleet gathered at the club for the now traditional Curry night.

Day two promised more wind and a scattering of heavy showers and boy did it deliver! Dom and Issy Johnson revelled in the breezier conditions to take an impressive race win in race four ahead of Nigel Wakefield and Emily Saunderson. Jamie and Jo McEwen proved that being some of the last in the bar the night before is no barrier to success, sweeping to third. Having definitely got to grips with their borrowed Rondar, Alex and Thomas Davey powered through the line into fourth.

Race Five’s port biased line and a pushing tide caught a few people unawares and OCS, including previous race winners Dom and Izzy Johnson and Nigel Wakefield and Emily Saunderson who unwittingly led the race to the end without restarting. Close behind a superbly tight contest for the top positions developed with big shifts always threatening to pay one side or the other. Ben Lumby and Liz Evans defended a small lead up the right hand side to win the race with Guy Davison and Amy Bowden close behind taking third while Chris Kameen with Jenny Johnson roared in with a left hand shift to sneak second. The Morris boys claimed another great result in fourth and Damian Boreham and Alice Gardner in F30272 ‘Squeaky’ finished a brilliant race in fifth.

The fleet headed back to the beach for a richly deserved pasty lunch. With the breeze having built, only the hardiest (read most bonkers) helms took to the water, to duke it out for the Chichester Smith Singlehanded Championship. Local boy, Len Trenowith in F4040 ‘TwoforTea’ controlled the race right off the line. Len banged the corner and disappeared off into the distance never to be caught. Behind Jamie McEwan F3615 ‘Skirmish’ battled into second with some slick jibstick skills and Ben Green F1522 ‘Pandemonic’ who had chosen not to use the stick hung on in third.

The fleet repaired to the Lemon Arms in nearby Mylor for pub grub, booze and banter. The Firefly takeover continued into the small hours with only a brief interruption by the arrival of a small crew of pirates (very “on brand” for Cornwall). Overnight leader Guy ‘notorious OAP’ Davison was very proud to be last to leave the pub after managing to keep up with twenty-somethings until the bitter end.

If Saturday and Sunday were champagne sailing, Monday was more like White Lightning. The fleet arrived at the club to skies that matched heads after the night before and a strong and building breeze. A few took a look at the forecast and called it a weekend, but most of the fleet took to the water for an epic final day of racing.

The sixth and penultimate race saw yet another worthy winner as Stuart and Jane Hudson demonstrated the excellent strategic ability and impressive turn of speed that has taken them to so many National titles. The Huds decisively snatched victory from an extremely rapid Ben Lumby and Liz Evans who were in the hunt to make it back to back South Westerns titles. Third saw a Johnson battle with Chris Kameen and Jenny Johnson powering through to take the place from husband Dom and daughter Issy.

But the real drama went on further back in the pack. As forecast, the wind had begun to really pick up behind the leaders giving the mid-fleet a shake-up. An especially ferocious squall sent one or two into the drink and several boats suffered breakages. Among them, Steve and Arthur Greaves whose broken mast made a disappointing early end to the event after a great first lap. Ali Smith and “go faster racing dad” Chris in F2710 ‘Reservoir Dog’ also lost out after Chris took an unscheduled swim up the final beat.

There was a welcome pause for the now pretty knackered fleet before the seventh and final race got off as the committee adjusted the line and the wind evened out across the course. Then it was all systems go!  With the top ten boats separated by just a few points, it was everything to play for. The wind started off similar to the previous race, F3-4 from the NW, but quickly freshened again. Jamie and Jo McEwen wriggled out to the left hand side at the top of the first beat and picked up a fortunate lift on port to round the windward mark first, just ahead of Roger and Finn Morris followed by Nigel Wakefield and Emily Saunderson. The McEwens were hit by a big gust and planed off down the first reach, stretching ahead of the chasing pack. On the broader second reach the fleet closed up again, but on the next couple of beats the McEwens made the most of the leader’s advantage, getting to the shifts first and sailing in flatter water, to extend a reasonably comfortable lead. By the final lap the race officer was recording gusts of 29 knots and everyone was feeling quite tired! The McEwens held on to take line honours, followed by Nigel and Emily and then the Morrises. Next to finish were Stuart and Jane Hudson and local teams Darren Williams and Verity Slater, and Ben Lumby and Liz Evans.

Further back, after showing “worryingly quick” pace upwind in the freshening conditions to come back from a bad start, Ben Green and Fi Edwards in F1522 ‘Pandemonic’ provided some final entertainment for the fleet by crossing the finishing line in 11th and promptly sinking. Luckily for team “We never capsize” we don’t do Duckhams at Restronguet so they got away with a friendly ribbing from the rest of the fleet as everyone rallied around to recover the stricken boat.

With the whole fleet ashore and changed it was time for prizegiving. Broadcast live on Facebook, Twitter and Instagram PRO Henry Metcalf thanked competitors for coming and praised the volunteers and sponsors before launching into the presentation of goodies.

First up was the presentation of a lifetime achievement award to class legends Peter and Dawn Langdon who have recently retired from sailing. The extraordinary octogenarians have racked up an impressive amount of Firefly silverware over the years including winning the National Championship  “A few times”. Accepting their prize, Peter spoke briefly but movingly about their 60 years in the class, crediting the Firefly for the strength of their marriage. He then handed over to his wife for a reminder that 2020 is going to be an anniversary year for the South Western Champs and it would be great to have a bumper turnout (23rd-25th May 2020 – Get it booked off work now!) and the presentation of the championship prizes.

The Ronstan drybag for top youth helm was awarded to Polly Mason, sailing F4000 ‘The Walrus’ with dad Will. Will was thrilled with his first win of anything at Restronguet – and all achieved despite the incompetent crew! (Will’s words)

Lucy Boreham and Rachel Crebbin edged top lady from Amy Morris and Gilly Phillips by a very narrow margin.The closely fought battle marked a magnificent return to form from “Team Willow” who have been less active on the circuit for the last two years due to illness and injury – well done ladies!

Prizegiving done and dusted the fleet tucked into a proper Cornish cream tea prepared by RSC members on the now sun-soaked terrace and planned the return trip for next year.

The next Event on the Firefly Vines Series is West Kirby as part of the West Kirby Regatta on July 6th and 7th.