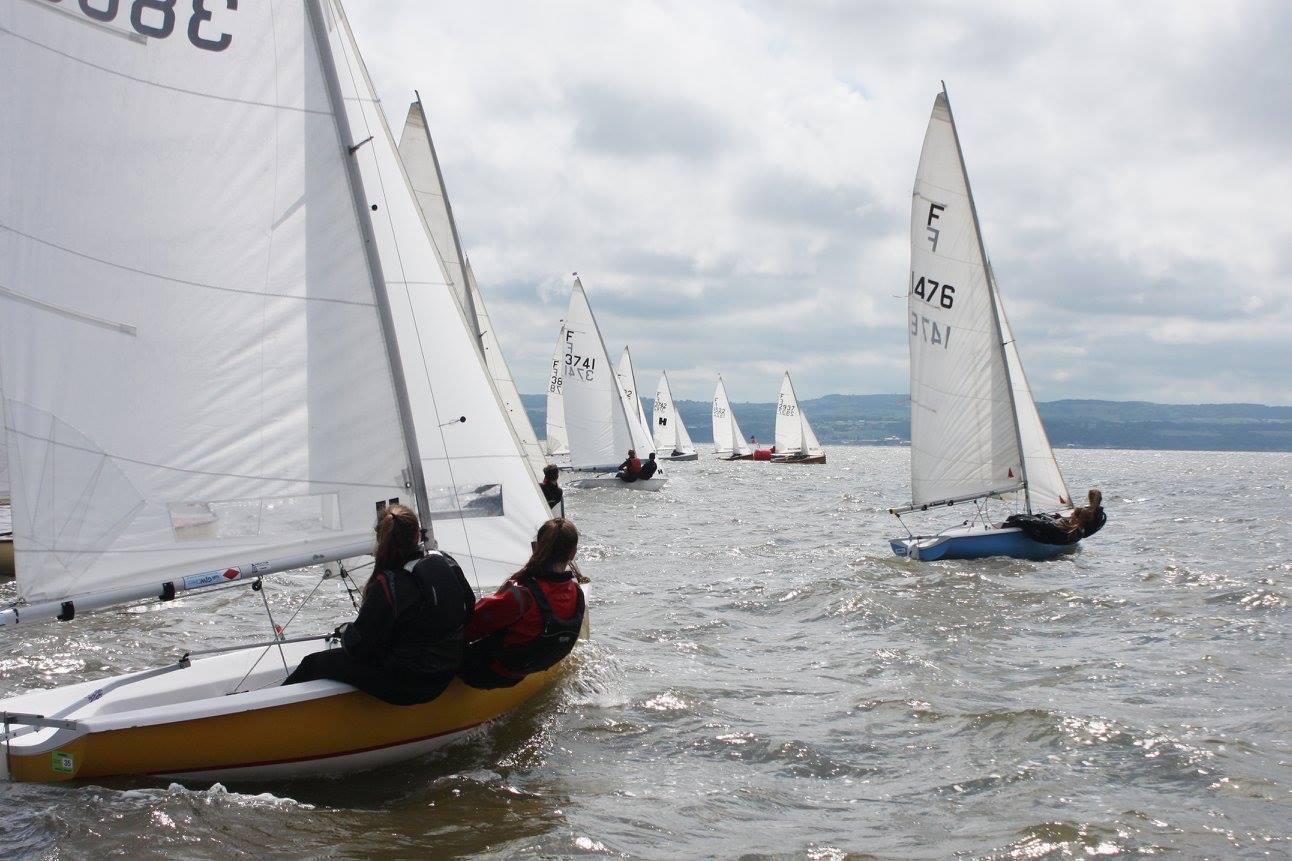 We had 3 races on the tide on Saturday with a bit of sunshine and a perfect force 3 -4. With the tide later in the day it meant we had a leisurely start with Chris Kameen (class captain) giving the briefing at 1pm. Everyone was ready to hit the beach straight after and Paul Jenkins set some triangle sausage causes and efficiently got through the 3 race schedule.

With the tide with the wind the starts got off first time and Chris Kameen crewed by James Colquitt got out of the traps well and led the race from his brother Paul and Laura. Third were Alex Colquitt and Rob Giardelli. The fleet was all pretty close which meant some of the fleet were a bit high searching for the extra puff to get surfing. At the wing mark Paul and Laura headed off towards the Hilbre racing marks (sack the navigator!!) which mean Alex went through to second. Chris, leading by a comfortable few lengths with his ancient sails fluttering in the breeze, allowed Paul to close the gap a bit as he squeezed into second using a favorable lift at the windward mark. Down the run Paul and Laura got the inside lane just in the nick of time to take the first win of the day. Chris and James second , Alex and Rob third.

The second race was more straight forward with Paul and Laura reaching the first mark in the lead and holding off the lighter crews downwind. Through the fleet there were all ages with two father and son teams the Hayleys vs the Matthews battling it out as well as the group of West Kirby “kids” all hiking far too hard.

The 3rd race mixed it up a bit as the tide had turned so the wind shifts became more important, this meant those on the left of the line had the advantage of the start. By the top Paul and Laura managed to just about squeeze into the lead coming in from the left after a bad start. Chris and James had to fight back by sailing low and fast down the reaches and popped out in 3rd position. By then Paul and Laura had won but the 2nd place would be decided by Alex and Chris’s positions. Alex and Rob showed good pace downwind to hold off Chris and James to take 2nd overall.

Based on this event it’s looking good for the future of Fireflys at West Kirby so well done everyone.

When we got in we ate a proper Aussie style sausage sizzle and sank a few coldies.

Chris ran a small team racing event on Sunday for those wanted more, 9 boats took part before the rain set in on Sunday afternoon!