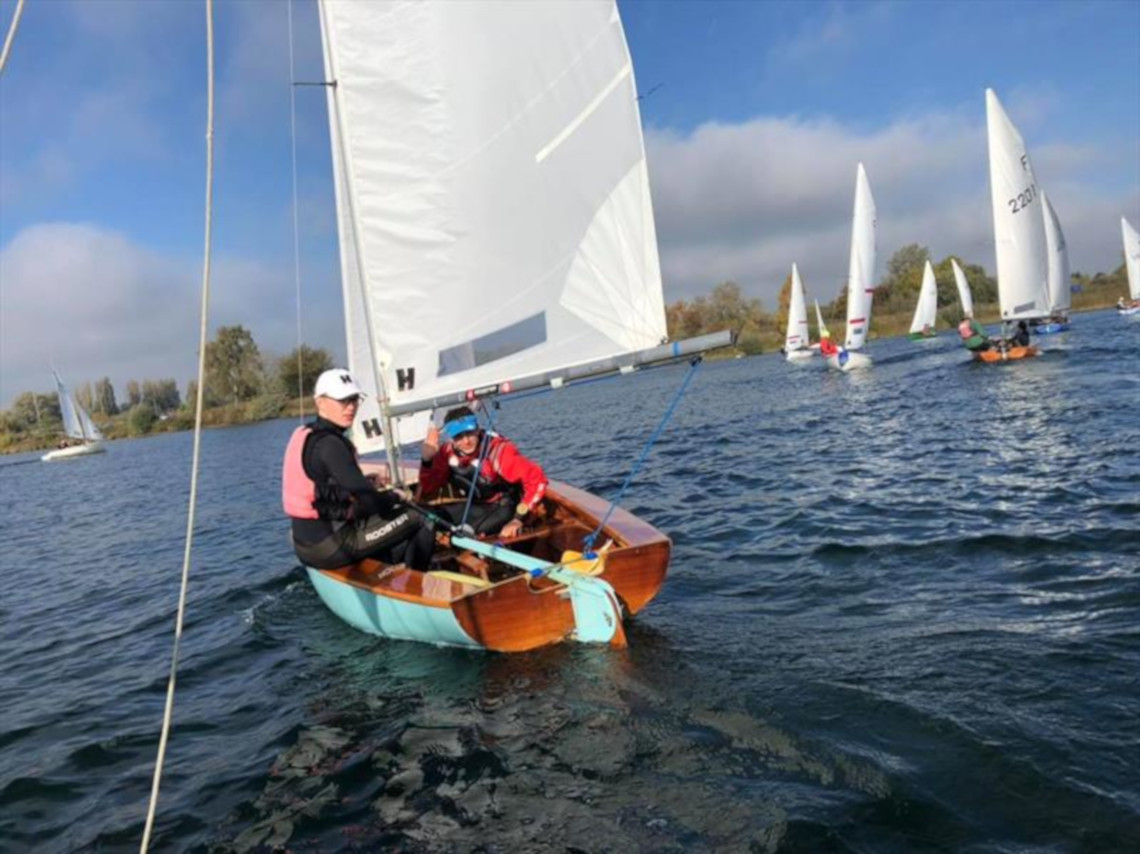 The 2018 National Firefly Inland Championships at West Oxfordshire Sailing Club saw a good turnout from both visiting and local boats. There was a good vibe in the boat park as 25 Fireflys rigged overlooking a misty and initially windless morning

After a short postponement a light breeze filled in as the sun burnt off the mist and racing got underway. The wind direction was across the lake leading to the race officer setting a zigzag course involving three beats and saw lots of concertinaing(if that’s a word) of the fleet as groups of boats came unavoidably into windless areas.

Race 1 saw locals Alex Baxter and Joe Scarborough in F2246 ‘Scruffy’ starting by themselves at the starboard end, lead at mark one after a right hand swing in the wind. Stuart and Robbie Hudson sailing F3850 ‘Fursty Ferret’, who had tacked onto port very quickly after the start, rounded second closely followed by Nigel Wakefield and Emily Saunderson in F3007 ‘TipTop Too’. The Huds’ gained the lead on the next leg and held onto it, despite being challenged several times by Wakefield/Saunderson and John Greenland and Ruth Guy sailing F2296 ‘Falken’ who eventually finished second.

Race 2 started after lunch with TipTop Too leading all the way round and winning fairly comfortably. Fursty Ferret finished second and Falken third.

Race 3 saw TipTop Too and Falken go 1st and 2nd round the first mark and these two boats seemed to pull clear quite easily. Fursty Ferret steadily climbed from sixth to third during the next three and a half laps and it looked like these would be the final top three positions. However, the lake had other ideas and the leaders were what is known by locals as “WOSC’d”: sitting in a calm patch whilst the wind filled from behind! There was still no wind at the bottom mark but the chasing boats had residual momentum and began to drift by. TipTop Too still led narrowly at the bottom through good positioning but The Ferret and others tacked to the right and to perhaps slightly more wind and a lift on starboard. Fursty Ferret sniggled to a lucky race win with Chris Kameen and Dave Chisholm in F2937 ‘Smutty’, another big beneficiary of the WOSC effect in 2nd, TipTop Too 3rd and Falken 4th.

A great day’s sailing finished with tea and homemade cake and, for those who stayed on, a fish and chip supper and the other usual refreshment!

At this point our Publicity Sec is keen to point out that, in true Firefly style, an enthusiastic amount of ‘other refreshment’ occurred. Eagerly supported by the usual suspects from the fleet, a small but highly dedicated contingent from Bournemouth and Cardiff universities upheld the bad name of students everywhere and continued to lead the revelry until the bar was dry. Meaning that Sunday morning dawned with ever-so-slightly improved breeze and a few sore heads.

Day Two looked like groundhog day with mist again at the start, same light wind and same direction and so the race officer left the marks where they were and off the fleet went on the same course.

Race 4 saw TipTop Too round first again but part of a group. Ferret was back in the pack after a poor start but managed to recover to Seventh or so by the windward mark. Lots of place changing ensued over the following laps with Scruffy ending up leading ahead of a once again fortuitous Fursty Ferret after another chaotic broad reach. These two pulled away and gained the required two patches of wind clear to be considered relatively safe. Fursty Ferret eventually finished narrowly first with Scruffy second and TipTop Too third again.

Fifth and final race got going straight away and this time it was Falken who managed to pull clear of the pack and take the race win from Baxter/ Scarborough who were having a good day with another second place. TipTop Too’s third place meant Falken pipped them to 2nd overall on count back.

Thanks to WOSC and all the weekend duty team for a great weekends sailing and for their hospitality.

The NFA are once again pleased to have seen so many students and recent graduates out on the water, particularly as most had traded university Rondars for wooden mk3s. One of the things that has always attracted so many into the Firefly fleet is the abundance of competitive boats at affordable prices and the resurgence of wooden boats amongst the ‘less vintaged’ members of the class is a heartening sign for the future of the class.